15 Motivational Movies for every Entrepreneur

Like industrial revolution, this is the era of Entrepreneurship revolution.  It can get a lot tougher than you might have expected in the world of entrepreneurship and business. There might be many rough patches along the way and you may feel to just quit it and ‘Give Up’. But I believe that perseverance does pay off in the long run. All you need is a change in your perspective of how you accept and believe in things. Get introduced to your friend in helping you do so – Motivational Movies!
You need motivation daily to get your today’s expected mark completed. Motivation to finish off your long-struck deal. And sometimes it just gets harder than ever just to feel inspired to finish it off as you have planned. That’s when you need an inspirational push. Movies have always been, and will continue to inspire many people around the world. Movies have the potential to inspire you to no bounds with slick storytelling and background score that gives a boot to get up and start working. How good does it sound that you can watch these positive motivational movies and become a better entrepreneur!

The following is a list of those amazing motivational and inspirational movies which motivated me(Saikat Ghosh) in starting YouMash : 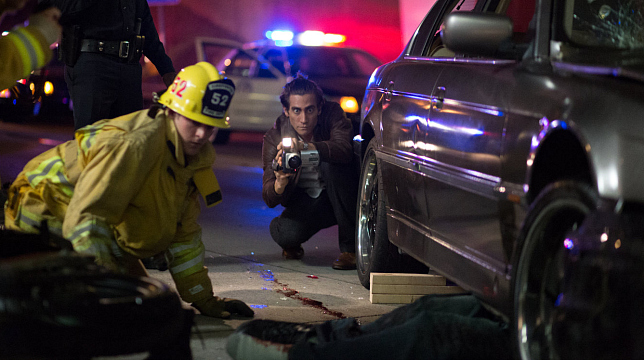 I just finished watching this movie, and first thing I’m doing is updating this post. Nightcrawler is one such movie, which every entrepreneur with great vision should watch it. This movie is little brutal, but acting by Jake Gyllenhaal will keep you surprised. This movie is about a struggling guy who was looking for a job, but he couldn’t get one. The guy found a window of job opportunity when he saw a live crime journalism, and he started doing the same for the living. What you will learn from the movie is, how one can do anything without much background, how art of persuasion and negotiation can take you to the place. How focusing on your positives, and improving on them will make you limitless. Go watch this movie all by yourself, and come back to share your thoughts.
And the last line is something which will make you remember this movie forever:

The social network was a Hollywood blockbuster released in 2010. It was based on the fairy-tale rise of Mark Zuckerberg and his startup – Facebook. The social network remains on top for inspiration because of its deft storytelling and brilliant background score.
This is a good movie on taking your idea from dreams to reality. The movie also teaches a lot on scaling a company from your dorm room to a Billion users! Although the accuracy of this movie has been questioned, it doesn’t matter, it is a great source of inspiration for all entrepreneurs. Here is one of the best line from the movie:

The pirates of Silicon Valley is again a well-crafted movie basically covering Bill Gates’ success of Microsoft and Steve Jobs’ Apple. Both were no doubt ‘The Best Pirates!’ and this movie says the exact same. The movie is a take on the rivalry between Steve Jobs and Bill Gates since their very early days.

Noah Wyle did a great job in portraying young Steve Jobs in this made-for-television movie.

This is one of my favorite motivational movies and the best movie on never giving up. This movie gives you goosebumps and tears with Will Smith’s amazing portrayal of Chris Gardner. This is a movie based on a true story published by Chris himself as a memoir. It was a best-selling book and also a blockbuster movie. It adds a sense of reality due to the Italian director and no Hollywood cheese!

Never give up, no matter what; is given a mash out in a simple yet effective fashion.

Oldie-goldie and again, needs to be on the top of the motivational movies list! One of the IMDB’s All-time Top 10 movies. Two imprisoned men bond over a number of years, finding solace and eventual redemption through acts of common decency. The protagonist Andy Duffrene manages to make the best out of a very bad situation(being imprisoned for a false murder) and through perseverance manages to achieve more than he ever thought possible.

“Fear can hold you prisoner. Hope can set you free.”

The story revolves around the simple nature of Forrest and how he appeals the entire world as he proves that you don’t have to be a genius to achieve something, all that you need to do is just try. My favorite quote from the movie:

This movie is about Oakland A and its general manager Billy Beane (Brad Pitt). The team is an underdog and also lacks a lot financially. The team has nothing but lowest salary available for players in Baseball. Apart from that, all of his star players are picked up by bigger teams. Now he needs to look at how to create a winning team without class that money can buy.

This movie shows entrepreneurs to take an innovative approach to an existing way of doing business and beat your competition, with little to no money.

Again, The Godfather is one of the Top 10 All time hit movies in IMDB and the most critically acclaimed films of all time. This movie is a story about the growth of a small family business and fighting off opposition at any expense, how it changes through time until the business becomes the largest organized crime family in New York City.

The father and his son Corleone are the brains behind the operations and they show what it takes to get to the top and stay there. One of the must-watch motivational movies for learning to from the masters on how to stay on the top. You don’t have to follow the line of being illegal, but there is still a lot to learn from the movie. And you can’t resist yourself from tweeting below line from the movie:

“A man who doesn’t spend time with his family can never be a real man.” – Click To Tweet

This a movie on business and greed. The story is about an ambitious young stockbroker, Bud Fox. He has and does everything in his power to succeed, even that means a little insider trading. Insider trading is a reprehensible crime and yet that doesn’t fear him. He meets with Gordon Gecko and takes over his life with the ‘Greed is good’ motto in doing business.

This is a true underdog story of Rocky Balboa who is given the chance to fight the Heavyweight Champ. He has an opportunity in hand to make a better life for himself by going head to head with the challenge and winning the prize.
This movie teaches a lot about the competitive spirit and would inspire you more to get up and beat your competition (not literally!).

This is a movie based on a true story, that shows just what it takes to stay at the top. The protagonist is faced with rejection and his people turning their backs on him while making the leap of faith and quitting his full time job. Slowly, he is identifies the best road for him to follow, and ultimately ends up being successful in both business and life.

Startup.com is an excellent documentary on the internet gold rush of the late 1990’s. This documentary has all the necessary ingredients to learn a few great lessons on the internet bubble. Rise in competition, lifelong friendships on the line and do-or-die ambition all combine to form a deadly cocktail for an internet startup.

Everyone who hates work raise your hands! If you were one, Office Space is definitely a movie for you. Everyone hates work! Who doesn’t? Want a move that will want you to get out of a desk job in the corporate world, then this is it! This is one of the must watch motivational movies for those who hate work.
This movie is about a story on Peter Gibbons. He is the one who can’t help but be promoted as he starts to slack off and do things his way, but there arises trouble as his new careless nature starts to cause him stealing from the company.

Apart from these movies, TED videos are highly recommended to give you much needed push to start and finish anything. One of the movie that I highly recommend is “The secret”. This movie will not only help you to build the positive outlook, it will change your perception and will help you to live a meaningful and happy life. If you are one of those who lacks patience, I highly recommend you to watch “The pursuit of happyness” and “127 hours”.
This is my list of inspirational movies, and I’m sure there are many more movies which must have motivated you, do share your list via comments. Which are your favorite motivational movies for inspiration? Share your thoughts and comments below. If you find this list useful, do share it on Facebook and Google plus.

Mash out your feelings in the comments section below.. And don’t forget to check out the other posts of #YouMashBlog ..

Earn More Money from your Blog or Website by Shortening Links | Shorte.st

Have you been using ad-platforms or more specifically, monetization websites like AdSense or Infolinks to monetize content on your website? And you can't see...
Read more
Blogging

Ever thought How you can easily make money Online? In today's article, I will give you tips on making money online with just small...
Read more
Blogging

If you are one of those bloggers who is using a free WordPress theme, you are likely changing your theme around a lot.Two of...
Read more